You know who has the best readers in the world? We do! And what better way to show some Mixed-Up love than with a giveaway!! Check out these four fantastic titles – two fresh debuts, a citrus-delicious story and a beloved classic:

A signed hardcover of The Fourth Stall by debut author Chris Rylander!

Description from Indiebound: Do you need something? Mac can get it for you. It’s what he does—he and his best friend and business manager, Vince. Their methods might sometimes run afoul of the law, or at least the school code of conduct, but if you have a problem, if no one else can help, and if you can pay him, Mac is on your side. His office is located in the East Wing boys’ bathroom, fourth stall from the high window. And business is booming.

Or at least it was, until one particular Monday. It starts with a third grader in need of protection. And before this ordeal is over, it’s going to involve a legendary high school crime boss named Staples, an intramural gambling ring, a graffiti ninja, the nine most dangerous bullies in school, and the first Chicago Cubs World Series game in almost seventy years. And that’s just the beginning. Mac and Vince soon realize that the trouble with solving everyone else’s problems is that there’s no one left to solve yours. 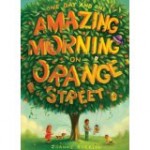 A hot off the presses hardcover copy of One Day and One Amazing Morning on Orange Street by Joanne Rocklin.

Description from Amazon: When a mysterious man arrives one day on Orange Street, the children who live on the block try to find out who he is and why he’s there. Little do they know that his story—and the story of a very old orange tree—connects to each of their personal worries in ways they never could have imagined. From impressing friends to dealing with an expanding family to understanding a younger sibling’s illness, the characters’ storylines come together around that orange tree.

Taking place over the course of a day and a half, Joanne Rocklin’s masterful novel deftly builds a story about family, childhood anxieties, and the importance of connection. In the end the fate of the tree (and the kids who care for it) reminds us of the magic of the everyday and of the rich history all around us.

And here’s a book for all the NON-readers out there!  An Advance Readers Copy of Charlie Joe Jackson’s Guide to Not Reading, by debut author Tommy Greenwald.

Description from Amazon: Charlie Joe Jackson is proud to say that he’s never read an entire book from cover to cover. Sure, he’s glanced at the first chapter and last chapters and maybe even read the flap copy, but when it comes to actually reading what’s in the middle, Charlie counts on his friend Timmy McGibney to do the reading for him in exchange for an ice cream sandwich. But when Timmy decides that his price has gone up to three ice cream sandwiches, Charlie Joe Jackson is faced with two very unappealing options: let himself be blackmailed or read an entire book. What’s an enterprising non-reader to do?

And to round out this quartet of books, we have The Willoughbys by twice-Newbery Medal winner Lois Lowry!

Description from Indiebound: Abandoned by their ill-humored parents to the care of an odious nanny, Tim, the twins, Barnaby A and Barnaby B, and their sister, Jane, attempt to fulfill their roles as good old-fashioned children. Following the models set in lauded tales from A Christmas Carol to Mary Poppins, the four Willoughbys hope to attain their proscribed happy ending too, or at least a satisfyingly maudlin one. However, it is an unquestionably ruthless act that sets in motion the transformations that lead to their salvation and to happy endings for not only the four children, but their nanny, an abandoned baby, a candy magnate, and his long-lost son too. Replete with a tongue-in-cheek glossary and bibliography, this hilarious and decidedly old-fashioned parody pays playful homage to classic works of children’s literature.

For this giveaway, you can garner bonus entries for sharing this on Facebook or Tweeting about it.  (You must list each action separately in the comments.)  The winner must live in the US or Canada.  The winner will be announced February 22nd.