Cage Match: Pippi Longstocking Vs. Any Character in Children’s Literature

For my money, Astrid Lindgren’s Pippi Longstocking is the most unique character in children’s literature.  I’m not just talking Pippi’s fiery red braids and superhuman strength, or even the fact she’s only nine- years-old yet lives alone at Villa Villekulla with Mr. Nilsson, the monkey. 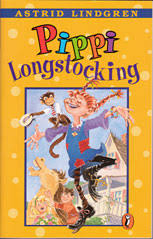 Pippi Longstocking is one-of-a-kind because of her live-in-the-moment outlook and the fact that no one ever tricks her.  Pippi is always, always ahead of the game.

And that’s why I wish I’d never embarked on this blog post topic.

See, my idea was to search out contemporary characters that could be considered, if not Pippi’s equals, then her kindred spirits.  I wanted to provide a whole new book list for readers who love Pippi’s generous worldview and her sly ability for telling the truth within tall-tale “lies.”  So I went to two public libraries and picked the brains of three children’s librarians.  They were knowledgeable and eager to help, and gave me about twenty titles.

Some of those books I’d already read but many were new to me.  I happily took them home and began reading with the intention of highlighting the books in this post.  But after hours of agonizing stops and starts, I’m admitting defeat.  Why?  Because even though I enjoyed those books and their characters, none came close to replicating my love and adoration for Pippi.  It would be a stretch putting those characters in the same category.

Is there any character in children’s books you believe would stand a chance against Pippi Longstocking in a literary cage match?  If so, please share in the comments.  But before you start rattling off suggestions, keep this PIPPI LONGSTOCKING excerpt in mind:

“Yes, but I mean, don’t you have any mother or father here?”

“No, not the least tiny bit of a one,” said Pippi happily.

“But who tells you when to go to bed at night and things like that?” asked Annika.

And this excerpt from PIPPI IN THE SOUTH SEAS:

The arithmetic lesson was interrupted by Captain Longstocking, who came to announce that he and the whole crew and all the Kurrekurredutts were going off to another island for a couple of days to hunt wild boar.  Captain Longstocking was in the mood for some fresh boar steak.  The Kurrekurredutt women were also to go along, to scare out the boar with wild cries.  That meant that the children would be staying behind alone on the island.

“I hope you won’t be sad because of this?” said Captain Longstocking.

“I’ll give you three guesses,” said Pippi.  “The day I hear that some children are sad because they have to take care of themselves without grownups, that day I’ll learn the whole pluttification table backward, I’ll swear to that.”

See what I’m up against?